Driving Tests cancelled by Snow till after Christmas 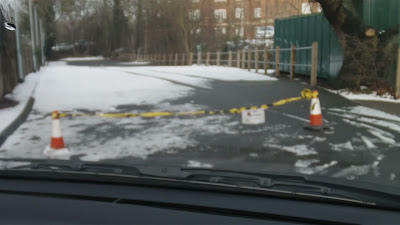 All driving tests in Mill Hill, Hendon and most likely Borehamwood(I did not go there, but since it is further North and more exposed to the adverse weather, the same will apply) have been cancelled by the local DSA centre managers due to snow and adverse weather condition of Saturday 18th December 2010.

Despite the fact that the last heavy snow fall was over 5 days ago, and the temperatures having been slowly but steadly rising with most of the main roads on the driving test routes fully driveable, the test centre car parks are not useable for test maneuvers. Infact walking to the car park itself is a heatlh and safety risk with potentials of slipping or falling down. It should be noted that the DSA does not own these driving test centres (premises are rented), so they don't have the responsibility of clearing the snow or making the pavements safe, so the best option in the interest of both the examiners and test candidates is to cancel.

Since there are no tests being conducted on the 24th of December 2010 in England and Wales due to Christmas holidays, there will be no chance of learner drivers taking an assessment until Wednesday the 29th December.

If you were due to have a test that has been cancelled by snow, the DSA will try and get you rebooked another appointment as soon as possible, but due to the fact that hundreds of tests have been affected in this winter 2010 adverse conditions, it might be late january or even febuary, and winter isn't over yet, so there still might be more snow to fall!

As always if you have far to travel to get to the Hendon test centre, Mill Hill or any DSA facility for a practical car/motorcycle or HGV assessment, and you are not sure it will go ahead, give them a call on the number on your appointment letter or email.

Thinking about becoming an instructor? Don't just make a decision based on the red driving school TV advertisement, do the proper research and know all the ADI training options available to you.

Subscribe to my online Driving Test Tips so you don't miss any future articles and get DSA updates direct to your inbox by Email service is provided and powered by feedburner, so I don't personally keep your email addresses, and you can removed yourself anytime after passing the driving test with just one mouse click.